The first political and major journalism experience I had, that I can recall, was asking Sen. John McCain a question at a press conference ahead of the 2008 election for Scholastic News. This moment has been forever seared into my memory. He was nice and answered my question like he would for any other journalist sitting in the room (from national outlets and market #3) despite me being in middle school.

Today’s news made me really sad. I’ve been trying to figure why. And I think that moment just really sparked something in me. I know he’ll never know that, but it made such an impact in my love for covering politics.

He is an American hero and has worked hard for his country. What an awful diagnosis for a person who has suffered so much. My thoughts are with him and his family.

I have to say, it’s so refreshing to see America come together to support him. I think my favorite message was from his former political opponent (fmr. President Barack Obama): “Cancer doesn’t know what it’s up against. Give it hell, John.”

John McCain is an American hero & one of the bravest fighters I've ever known. Cancer doesn't know what it's up against. Give it hell, John. 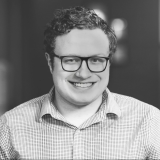